Fundamentals to consider if you want to achieve high yields

Over the past 5 years, 350,000 people have moved from London to other UK cities. So, what is attracting them elsewhere and is there an opportunity for investors to achieve better returns in these cities?

Home ownership - a distant dream for most young people

Home ownership amongst young people has more than halved over the past two decades. Twenty years ago, 46% of 25-year-olds were homeowners, compared with just 20% today. With the decline in house building and Britain’s growing population, the housing shortage and affordability issues will not be allayed any time soon. In the ten years from 2007 – 2017, house prices in England have risen by 29% yet wages have failed to keep up, with the average salary being lower than what it was 12 years ago once inflation has been considered. In short, unless the government pledges to build a significant number of homes over the coming years to stabilise house price growth, and wages rise significantly to keep up with the cost of living and buying, then it will remain unaffordable for those who do not already own their own home.

Although not an ideal economic situation for young people looking to buy, it can be beneficial to savvy buy-to-let investors, of whom many young people have come to rely on to provide housing. As businesses and young people move away from London, other cities are seeing increasing amounts of redevelopment that has made them more appealing to millennials. So, what makes a city a good place to invest in property? One indicator may be a strong jobs market…

Perhaps it seems obvious, but a strengthening employment market would increase the desirability of rental property, allowing for higher rental yields as it would mostly be young graduates and professional chasing these jobs. As the UK’s workforce becomes ever more mobile, professionals are not always looking to purchase a house and settle down in one place, and with increasing house prices this is not always possible anyway, especially for those early on in their careers. It also makes sense to assert that cities with a burgeoning jobs market tend to attract a younger crowd, who may not yet have the equity to purchase their own home and will instead have to rent for the foreseeable future. Dubbed “generation rent”, it also seems as though young people’s priorities have switched from home ownership to living a more transient lifestyle and spending money on more easily attainable possessions and experiences, as per the infamous suggestion that the younger generation spend too much on avocado toast instead of saving for a deposit, and travel. Although this is perhaps a consequence of a competitive and increasingly unaffordable housing market.


London's exodus, and how other cities are benefitting

For those looking to achieve good rental yields, it may be worth considering areas where there is strong job vacancy growth. London trails other major cities such as Liverpool and Manchester, both of which boast a 19.9% growth rate and 12.8% growth rate respectively. Businesses are beginning to look outwards from London, due to the high cost of maintaining an office in the capital and more expensive overhead costs. Cities such as Manchester and Liverpool are beginning to step into the limelight, offering class A office space at a more affordable rate than London, and excellent graduate retention levels – a perfect environment for businesses.

This has caused some sort of exodus from London, with young people leaving in droves to chase a more comfortable standard of living elsewhere. Cities such as Liverpool, Manchester and Birmingham are beginning to step into the limelight, offering more affordable housing and a varied employment market, now with job opportunities that were only previously available in London due to the creation of new business spaces such as MediaCityUK in Salford that brought with it the BBC and ITV Granada.

Manchester and Liverpool typically have a younger population. 32.9% of Manchester’s population is aged between 21 – 35 (the main demographic that rents property), and net rental yields in the city are some of the highest in the country averaging 6.04%. Glasgow also has a significant proportion of 21-35-year olds, making up almost a third of the total population (28.5%) and yields here stand at 6.9%. This suggests that there is a correlation between a high percentage of young people and the rental yield that can be achieved.

Brighton and Bristol also boast high job growth rates and a sizeable young demographic, but house prices in these cities rival London and therefore high rental yields are more difficult to achieve. Northern cities certainly have the advantage, due to the lower average house prices.

The attraction of these northern cities, outside of the burgeoning jobs market, is the cheaper cost of living. Glasgow’s Finnieston neighbourhood is regularly named as the hippest place to live and the average rent for a one-bedroom property is an affordable £518 pcm, compared to £1,823 in London. Liverpool and Manchester are similarly affordable, at £477 and £721 respectively. Even leisure activities such as a meal at an inexpensive restaurant costs less in somewhere such as Liverpool – £11.50, compared to London at £15. It is becoming clear why people are attracted to these cities, especially if the booming jobs market complements that lifestyle. 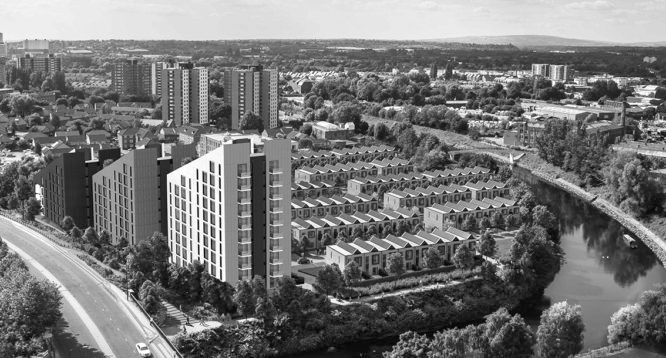 Uptown is one Manchester buy to let property. Prices start from £224,854 for a one-bedroom flat. The development is composes of 156 one-and-two-bedroom apartments, each with floor-to-ceiling windows. There is a gym and rooftop garden onsite and if residents prefer to socialise outside of the development, it is also close to the city centre and transport links. 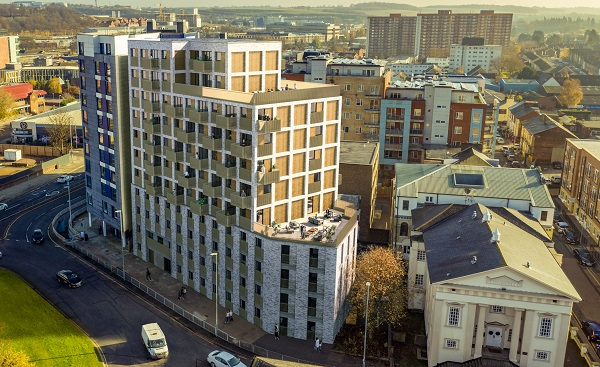 
Property in Luton comes in at an even lower price point and has the benefit of being close to London. The Orion is situated in Luton town centre, close to the train station and other amenities. The price for a one-bedroom apartment in The Orion starts from £179,900 and the development is due to be completed in in Q4 2020. As it is priced 10% below market comparables, there is room for capital growth, in fact upon completion an apartment in The Orion is expected to be worth £202,308. Investors can maximise yields as no ground rent is applicable, so projections of up to aa 6% rental yield can be attained.

There does seem to be a strong correlation between a city’s affordability, and its employment market; which then results in an influx of young professionals. Rental yields are dependent on a city’s affordability, as cheaper house prices mean it is easier to achieve higher rents. This means that although some cities in the south of Britain – namely Brighton and Bristol – are experiencing excellent job growth rates and have a significant proportion of young residents, average property prices are high which makes buy to let less lucrative. This is unless one is wanting to achieve good rates of capital growth. Those who still want to work in London are spilling out into Brighton in droves, and commuting back into the capital during the week. This is driving up property prices in the coastal city, and last year Brighton experiences capital growth of 8.75%. 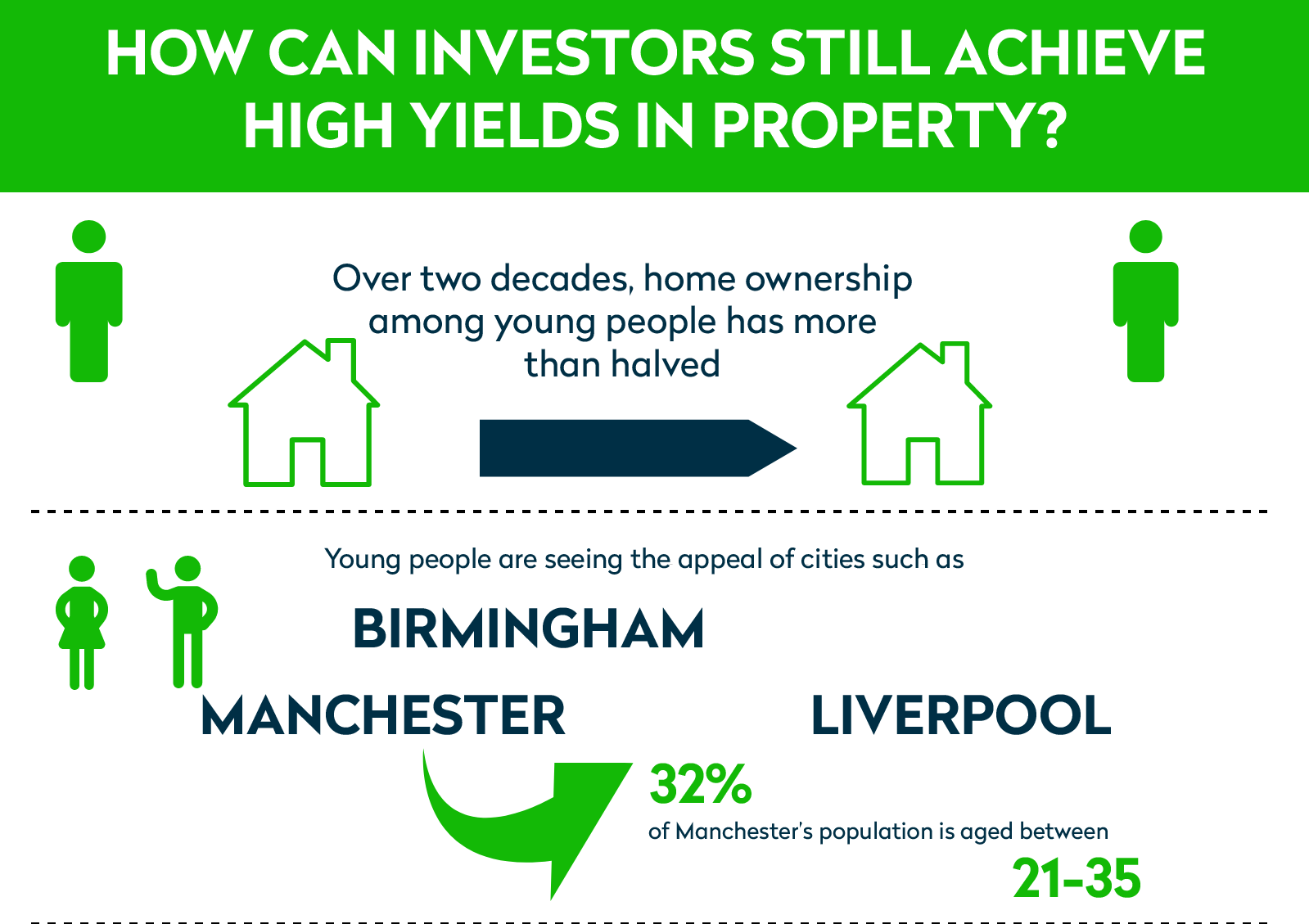 The standout cities with a blossoming jobs market and large pool of young residents include Manchester, Liverpool and Glasgow. Manchester's regeneration has made it an appealing city to young professionals and consequently appears to be the front-runner in terms of both the rental yields that can be achieved, and capital growth.

Unsurprisingly, it also has the highest percentage of 21 – 35-year olds in the country, at 32.90%. In previous years inward migration and job creation in London led to price growth as the number of houses being built failed to keep up with the number of people moving to the city. As the aspirations of younger generations shift from laying down roots in a certain area, to chasing new opportunities in more affordable places, is it time investors capitalised on the change? If Manchester piques your interest in terms of property investment, why not discover where you should be buying property in Manchester?

Look to the midlands for high yielding property and capital growth