Why Leeds is one of the best places to live

Why should investors consider Leeds?

Leeds is often overshadowed by UK cities such as London and Manchester, but it has a lot to offer residents and investors alike.

In Conde Nast, Leeds was rated 6th in a survey of the 15 Best Cities in the UK for visitors, and in 2017 Lonely Planet rated it as one of the top 10 cities to visit in 2017. Leeds is more affordable than many other cities in the UK, but it is not lacking in terms of entertainment options. Perhaps it is best known for Leeds Festival, a music festival that happens every year in the summer but for those with different tastes there is also the Leeds International Concert Season featuring over 200 concerts for those with different tastes. For film buffs there is the Leeds International Film Festival. Leeds also caters for those who enjoy the ballet, being the only city outside of London to have its own opera and ballet companies, Opera North, and Northern Ballet Theatre.

For those who enjoy exploring the great outdoors, the Yorkshire Dales National Park is close by and Meanwood Valley Trail is especially popular with hikers and bikers alike. For those who enjoy sports, it’s home to Leeds United and Headingley Cricket Ground.Harewood House is just a short journey from Leeds and has been used as a set for many popular TV shows and films, such as Emmerdale and the 2019 film Downton Abbey. It has also been voted as one of the best large visitor attractions in the Excellence in England Awards for Tourism 2003.

Leeds as a place to live

Leeds is not only an attractive place to visit, but also an attractive place to live. It has a thriving jobs market, and it is the UK’s second largest employment centre outside of London, with a workforce of 498,000. The number of opportunities in Leeds is only set to grow, with employment in the city forecasted to grow by 6.5% over the next ten years, higher than the UK average of 5%. The job market has enticed working professionals, and homes have become a sought-after commodity. According to Hometrack, Leeds experienced the third-highest house price growth over the last twelve months of 4.9%, yet houses remain a modest £174,400 on average.

One opportunity to invest is West Central Leeds. Completing in March 2021, the development is ideal for those who enjoy an urban lifestyle. Trinity Shopping Centre is just a 15-minute walk away, and for those travelling further afield, Leeds City Station is a 10-minute walk away.

Investors can choose from a range of properties in the development, including one-and-two-bedroom apartments, duplexes and a three-bedroom penthouse with city views. The development is well-placed to benefit from the house price growth Leeds has been experiencing, due to its convenient location and attractive build. Contact our team today to learn more about this opportunity.

Job growth in Yorkshire makes it attractive to investors

Other areas in Yorkshire that are popular with renters include Doncaster, Wakefield, Rotherham, and Burnley. This is because they are all close to distribution centres, and those working in warehouses on different shift patterns often want to live somewhere close by. Most distribution centres are scattered around the A1 and the M1, thereby making Doncaster a key distribution centre as these routes allow drivers to quickly make their way up and down the country to dispatch goods. 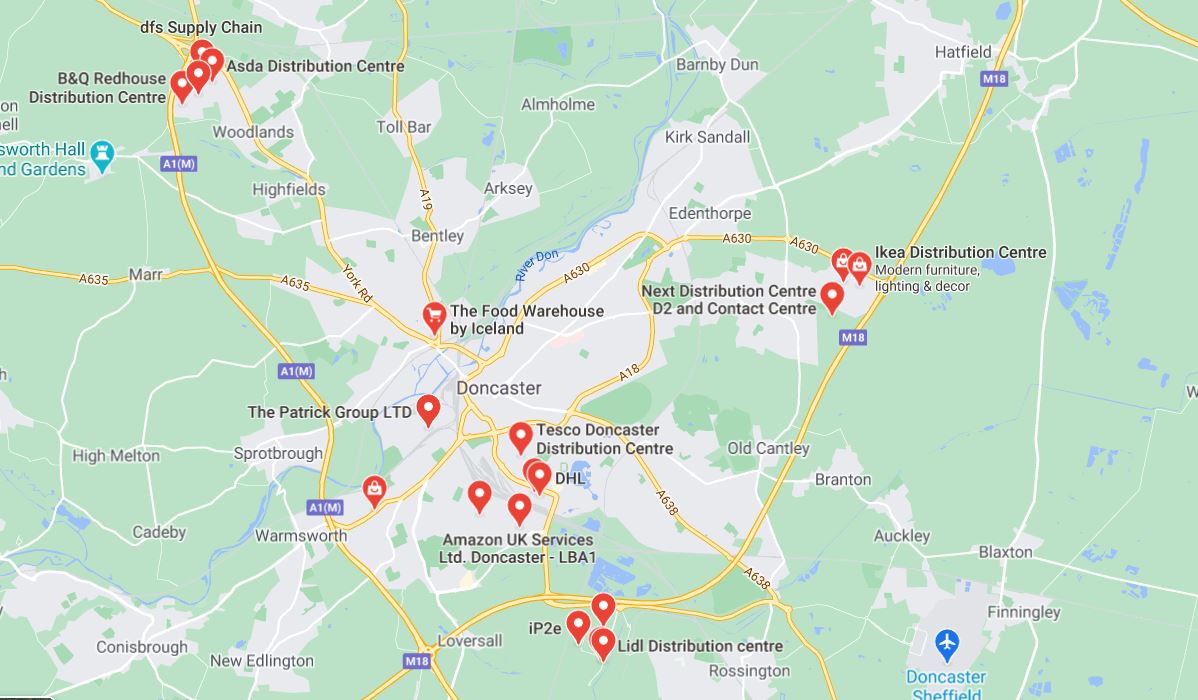 Property investment in these Yorkshire towns and cities is popular because of the low entry point. The growing jobs market also provides a more buoyant demand and returns can be lucrative if the correct property in the correct location is chosen. For the foreseeable future, we believe there will be sustained demand due to growing employment options in the region. Just recently, it was announced that a retail giant will build an 800,000 sq. ft distribution centre in Doncaster, creating up to 1,000 jobs. Under the Doncaster Inclusive Growth Strategy, plans have been laid out to create 13,000 jobs over the next fifteen years based on a “business as usual” growth rate. However, the aim is to create double that at 26,000 by implementing all actions in their strategy. Of course, these workers will need somewhere to live. The bulk of the warehouse and distribution company jobs pay an average wage of £1600 per month. The jobs generally attract to a younger employee. For several people, it may be the first time they have lived out their family home. There is an instant appeal, for those for time tenants, to want to rent a property which comes fully furnished. With affordability of rent being a key factor when deciding which rental property to select.

The popularity of HMOs

HMOs (or houses in multiple occupation) are properties which are shared by at least three tenants who are not from one household. HMOs are commonplace in cities such as London due to high property prices. However, they are becoming more popular in other towns and cities as people begin to recognise the social benefits they bring. Tenants can move into a property that is already furnished and liveable. Bills are usually included which means that they do not have the hassle of conducting meter readings, delegating certain bills, or dividing up living costs between one another. HMOs are ideal for those earning a lower wage or those who want to minimise their expenses.

They are also popular with investors as the higher number of tenants usually correlates with higher yields. It is also worth noting that tenants are usually on separate contracts, so if one tenant decides to give notice landlords will still be receiving income from the others. Whereas if a landlord is letting a property to one family or household, if they decide to move the landlord is more at risk of a void period if they cannot immediately find a replacement. One aspect that usually puts off potential investors is the amount of work involved. An HMO is generally a more “hands-on” investment compared to a regular buy-to-let. Landlords are generally responsible for repairs and negotiating tenancy agreements. However, there are still opportunities where that aspect is managed for the investor.

One opportunity is an HMO investment in Doncaster. The property will undergo renovation which takes approximately eight weeks and includes re-wiring the property and ensuring it meets HMO guidelines. A conservatory will be built which will be used as a living area, and existing living spaces will be converted into bedrooms. At the end of the renovation period, the house will present as a five-bedroom HMO. The developer has 25 years’ experience in the industry and investors have the option to view their operational properties before moving ahead with an investment.

The investment overall is £215,993 which includes the property, HMO licence and renovation costs. Upon completion, the investment will be advertised through spareroom.co.uk, and is usually tenanted within two weeks according to past performance of similar properties. Ongoing management will be provided in terms of tenanting and maintaining the property, so investors can enjoy the income an HMO generates without the hassle. The average yield achieved is between 10% - 16.46% depending on initial leverage. Investors can also achieve a 15% return on cash invested.

The property itself is close to shops and other amenities and benefits from excellent commuter links. It is also close to Amazon’s warehouses and Lidl’s HQ, making it an ideal home for warehouse workers or those working in Doncaster.

Yorkshire should be a consideration for any property investor. According to TotallyMoney, buy to lets in Yorkshire give the second best rental returns in the UK at an average of 5.9%. Fundamentals such as job growth combined with low property prices allow investors to sustain these returns, especially if the right sort of property is chosen.

For those looking at buy to let investments Leeds and or house in key areas of Yorkshires distribution hub, please do get in touch today to find out more information. You will be provided with comprehensive information on the properties and the area fundamentals which will explain why they are investments worthy of your attention. We offer similar buy to let investments in other towns and cities we believe are experiencing growth, and potential investors can be matched to a consultant who will present opportunities within budget.

How do London commuter towns compare with big cities in term of life satisfaction?

How will the Coronavirus Pandemic Affect the UK Property Market?