How Does Where You Live Affect Life Satisfaction?

It is a well-known fact that London is one of the most unhappy places in the UK. The gap between the wealthiest residents and the poorest can exacerbate anxious and unhappy feelings and the capital is consistently ranked as one of the most unequal cities. We have seen that economic equality positively correlates with personal wellbeing.

You may be wondering what life satisfaction has to do with investment. But what if these factors actively influence where people live? Should you be considering areas with good levels of personal wellbeing for your next investment and how do you uncover these areas?

Moving from London to Manchester for Better Life Satisfaction 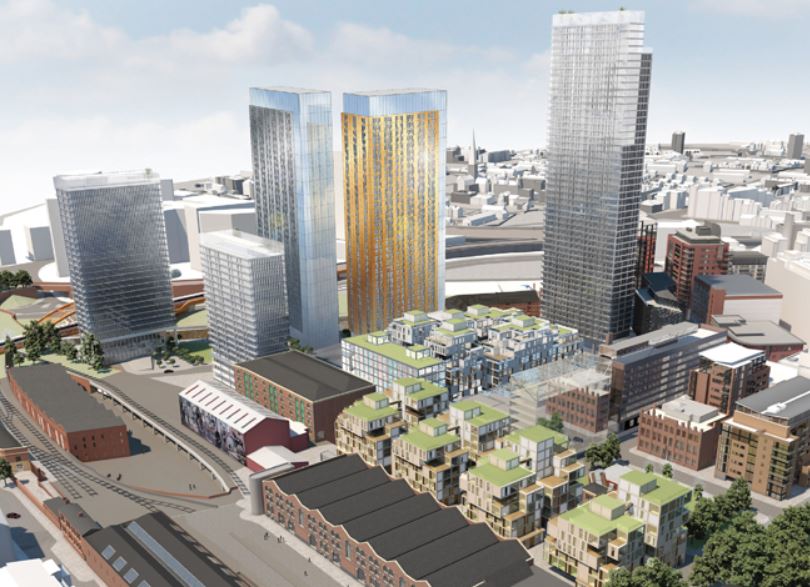 In recent years, many have moved away from London and Manchester has been the preferred destination. In 2017, a whooping 10,200 people moved from London to the Greater Manchester area. It’s not surprising that Manchester is a popular place to settle, it has undergone a huge amount of regeneration and has been named one of the best places in the UK to live for several consecutive years. According to “The Economist’s Global Livability Scale”, based on factors such as environment, healthcare, education, culture and infrastructure, Manchester ranked 35th in 2018 and 38th in 2019. The Economist’s Global Livability Scale ranks 140 worldwide cities on issues such as social stability, crime rates, education, and healthcare.

With accolades such as being the most livable city in the UK, Manchester has been one of the most popular places for Londoners to relocate to. London ranks just 48th out of the 140 worldwide cities assessed. However, these scales only rank cities and it means that towns and villages are overlooked, even if they offer the same or better in terms of life satisfaction.

City life is typically busy and fast paced. Although there may be green spaces, they are often crowded on sunny days and overshadowed by towering buildings. Aside from the very wealthy, people usually rent or buy smaller living spaces, often without a garden. As people are packed tightly into dense living spaces, being disturbed by neighbours is commonplace and can affect quality of sleep or relaxation. Leaving the house to escape the noise is not an option as the streets are bustling. Heavy traffic and the pollution that comes with it affects air quality, surroundings, health and degrades buildings.

On the contrary, towns and villages offer a quieter way of life. It is rare they would have restaurants offering cuisines from around the world, and the range of museums, galleries and theatres would be smaller. Also, public transport is not as extensive and does not run for 24 hours as it does in some cities. That aside, there are some benefits which help with people’s wellbeing. People can get more for their money in terms of property and have more space. Towns and villages are generally less densely populated which lends itself to a more peaceful environment. Traffic is lighter and the countryside is more accessible.

There are many differences in lifestyle that can impact wellbeing and life satisfaction. From how the local economy is faring, pollution levels, safety, and housing options. Read on as we explain in a more tangible sense how these factors have proven to affect life satisfaction and wellness. We will also show data comparing key UK cities with commuter towns to find out which offer better life satisfaction.


As we have mentioned above, towns and villages are quieter and more peaceful. People often live in larger houses and can buy more for their money. Living arrangements are more serene compared to the city. However, before we just supposed this would positively affect life satisfaction, we had no figures to back it up.

Data from the Office for National Statistics generally indicates that our suppositions are true. From the data we extracted, we compared an area of London (Camden), with two key UK cities (Birmingham and Manchester), and the popular London commuter town (Luton).

From the data we can see that Camden ranked highest for those reporting that their life satisfaction is “Good” at 58.54. Yet its average fared poorly and was the lowest of all areas compared at 7.48. Coming back to what we asserted previously, London is one of the most unequal places in the UK. The inequality is particularly felt in the London Borough of Camden, which is home to the 10% least deprived and 10% most deprived areas of the UK. Juniper Crescent and Gilbey’s Yard are in the 10% most deprived areas in the country, whereas Gloucester Avenue and Regent's Park Road are the 10% least deprived. They are situated just across the train tracks from one another, which can spark despondence and anxiety for those living in the less wealthy area.

Places that scored low on wellbeing rates were in built up areas. For example, Lambeth scored a low 2.55 out of 10 on the local environment subdomain which regards the level of air pollution in the area.

Perhaps surprisingly to some, Luton fared well with regards to average wellbeing rates, at 7.65. Rents are considerably more affordable, and earnings are greater. Economic security and income can have a huge impact on personal wellbeing.

Health, marital status and economic activity are the three biggest factors that impact our life satisfaction according to the Office for National Statistics. It may come as surprise that Luton scored higher than Manchester in term of employment and economy. 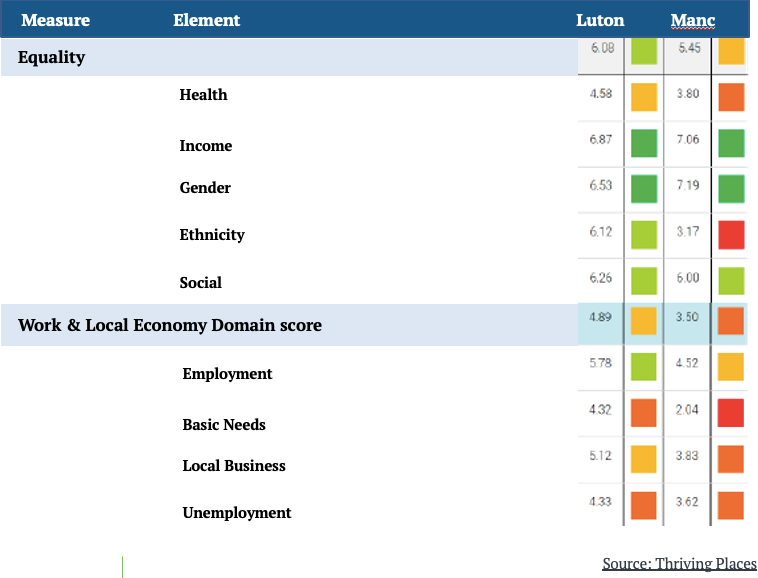 The Personal Wellbeing report is released seasonally by the Office for National Statistics. Data is collected as people are asked to rate their well-being on an 11-point scale. We analysed the data and used it as a marker that will drive capital growth with regards to property prices. You can download our full analysis to find out more. Affordability and Wellbeing comparisons

Luton has the lowest average rent of every place we compared. The average property rent in Luton according to Home.co.uk is £832, compared to Manchester at £1,155 pcm and London at £2,896 pcm. The Office for National Statistics reported a higher life satisfaction score for those who can spend money on life experiences rather than essentials such as mobile phones, rent and food. That residents in Luton have more income to spend on non-essentials positively contributes to its personal wellbeing score.

Another factor that can lower personal wellbeing is a long commute. It is understandable that people are working long hours and do not want to spend hours travelling to and from work. Not only does it eat into their personal time, but it is often stressful, tiring, and expensive. According to the Office for National Statistics, those with a long commute of 60-90 minutes were the most likely to feel anxious and report lower life satisfaction. Even though people live in the capital for convenience, they also have the longest commute of anywhere in the UK at 74 minutes. London was also found to be the most stressful according to a survey of 2,000 UK workers. Trains from Luton to London St Pancras take just under half an hour, so it is likely this convenient commute positively impacts personal wellbeing and life satisfaction.

We have already written about how the Coronavirus pandemic and flexible working arrangements will impact properties people choose and we think personal wellbeing will play a big part in that too. In recent years personal wellbeing has been brought to the forefront of discussions and the Coronavirus pandemic has made people to take more action to safeguard it. With the stresses that come from city living, we can see people moving to commuter towns and villages where there is a slower pace of life and reportedly higher levels of wellbeing.

Where Are People Moving to From London 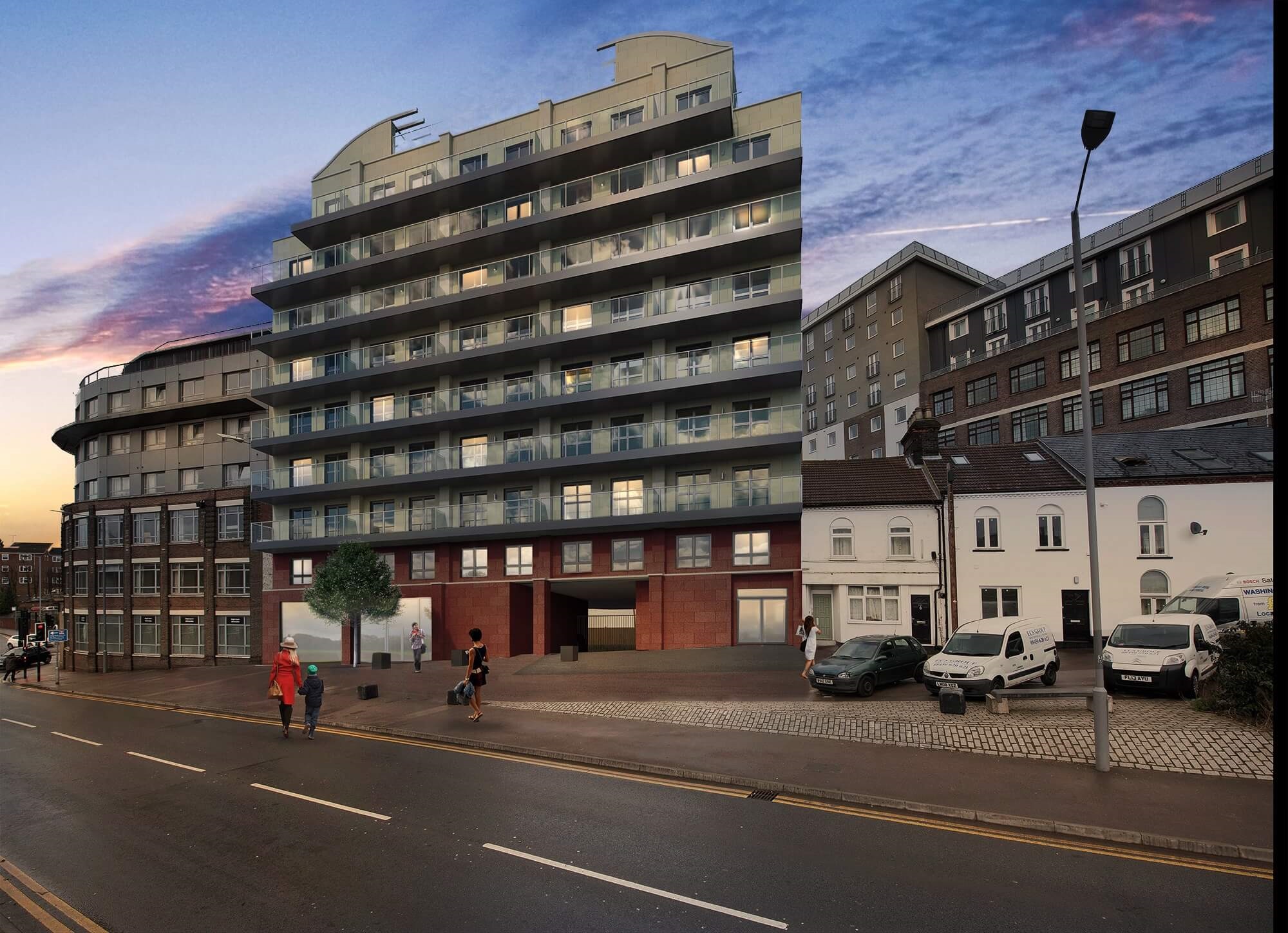 If people are looking to live in commuter towns and villages as opposed to cities, it makes sense that investors should consider those areas as demand will be higher. Midland Road is a new development in Luton town centre that has just completed. The development consists of one and two-bedroom apartments over eight storeys, and has a communal rooftop garden. Prices for one-bedroom apartments start from £175,882. It is also a stone's throw from the train station, ensuring residents a swift commute to central London as travel times can be as little as 25-minutes. An annual season ticket Luton to London King’s Cross costs £5576. A London Zone 1-6 travelcard is £2640 per year, but average house prices in Luton are still considerably lower.

Luton’s population is growing faster than the UK average which will positively affect rental yields and capital growth as property becomes more in demand. These are just some of the fundamentals we feel investors should be considering about London Commuter Towns before making a buy to let investment decision.

The importance of looking after your personal happiness has really come to the forefront in recent years due to campaigns from charities, organisations and political parties. We really think people will begin to consciously realise how their environment affects their mental wellbeing, and look more favourably on quieter towns, and this could provide an opportunity to investors. If you have decided that you want to move ahead with a commuter town property investment, why not read our buy to let mortgage guide. Alternatively, start the conversation with a property expert by getting in touch with one of our investment consultants who will guidance you through the key aspects of the UK property market and present exclusive opportunities not always listed on our website.