The exchange rate between the rand and other currencies continues to fare poorly.

Despite some uplift due to the election of Ramaphosa, it has failed to do much better. It seems for the long term it will not, is there a better time to consider investing elsewhere apart from now? Or do we just adopt a “wait and see” attitude in the hope that things will miraculously improve?


The rand is subject to short-term volatility due to political upheaval. When Nene was fired it jumped to 24:1 although it recovered quickly as it was a one-time shock. These short-term revelations cause the rand to drop and of course it has risen again due to positive changes. However, they all seem to be short-term and in the long term for eight years now we have seen it steadily decline. The rand has enjoyed short term positive uplift, but long-term outlooks are negative


Although the rand has enjoyed a period of improved exchange rates, for example when Ramaphosa got elected the value of the rand jumped and was worth 16:1. However the improved outlook was short-lived as Ramaphosa failed to live up to expectations with regards to sorting out the corruption in the ANC. Eventually, the people’s confidence in Ramaphosa has been eroded. He said good things before his election with regards to sorting out corruption and prosecuting those who had been responsible for it which had subsequently instilled confidence in the market.

One person who has been associated with corruption is Ace Magashule. Investigations have revealed that he was part of the Gupta network. However, perhaps from constraints within his own party, Ramaphosa has failed to convict him.

Another was Malusi Gigaba who approved the R38.6bn locomotive deal for trains that did not fit the South African rail lines and (according to Fin24.com) approved the Gupta-owned company sponsorships of R17.8m for 8 breakfasts with leaders of the state owned Eksom. During the Zuma years the efficiency of SARs tax collection services decreased. It may well have been deliberate planned to decrease that department’s resources in order to limit the possibility of the Gupta-Zuma misuse of public funds being identified.

At the FT Summit 2019, Ramaphosa stated that the estimated impact of Zuma state capture was $34Bn. The endemic corruption across all level of the South African government cannot be changed with one person. Especially since The President has not had any successful prosecution of those involved.


Rand Not Likely to Improve Any Time Soon

South Africa will rely heavily on its exports to keep its economy afloat, in 2019 its exports totaled $94.4 billion. These consist mainly of goods rather than professional services. The top ten exports that account for 75% of its global shipments are:


The only issue is with the Coronavirus pandemic, activity such as mining and vehicle manufacturing has paused, and ports have been closed. It has rendered South Africa unable to trade with other countries, and with the decrease in trade comes a decrease in the amount of money generated from it.

Further to that, the countries that buy the bulk of South Africa’s exports have been hardest hit by the Coronavirus pandemic. China buys 10.7% of the global total, followed by Germany at 8.3%, the United States at 7% and the United Kingdom at 5.2%. Globally, there is uncertainty when the Coronavirus pandemic will subside and trade will resume, and even when trade does resume it is uncertain whether it will be to previous levels as the pandemic would have affected global economies. This means that South Africa will struggle to recover economically as exports would be lower than before, further affecting the rand value.

Outside of the Coronvirus pandemic, South Africa’s own political environment and even weather patterns play a part in the success of its sector exports. Water shortages and land expropriation have impacted agriculture.

Dollar denominated debt. Dollar is the reserve currency and since South Africa government bonds are now junk status from all rating agencies, there is little trust that they can repay their loans. Not only does the interest rate increase under junk status but the impact of loans being in a foreign currency is catastrophic because as the currency devalues, loans values soar in real terms.

For a country trying to recover, South Africa is printing money (purchasing bonds). 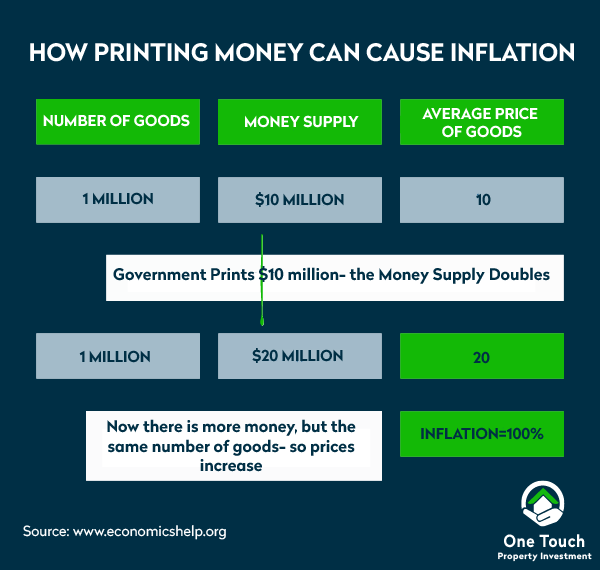 Printing money without increasing production will lead to inflation. An Oxfam report stated that 55% of South Africans are living in poverty. Increasing inflation could place more people living below the breadline and exacerbate the political tensions already apparent due to the inequality of income.


Will it get better?

Many South Africans have started to invest, or at least considered investing overseas. They’ve chosen countries with a more stable and less corrupt political environment and a stronger currency. The pattern we’ve noticed is that as the rand devalues, more and more South Africans begin to invest overseas. In 2016 the rand crept up to 17:1. In the 18 months prior to that, the number of South Africans investing in UK property soared by 400% according to Cape Business News.


One buy to let strategy for example could be to invest in buy to let student accommodation. In this case, investors usually receive rental guarantee for a set number of years, for example 8% (of the purchase price) for 5 years. Many investors keep the income in a UK bank account. Even if after the end of the rental guarantee investors sell it for the same price, they still essentially make money if they convert it back into rand and the currency has depreciated in that time. Here is an example of a student property purchased 6 months off-plan in 2013. The investor typically receives 4% interest during construction. The rental income started in April 2014 and is adjusted to rand with the exchange at the time. The property is sold to another investor in 2019 at the same purchase price. 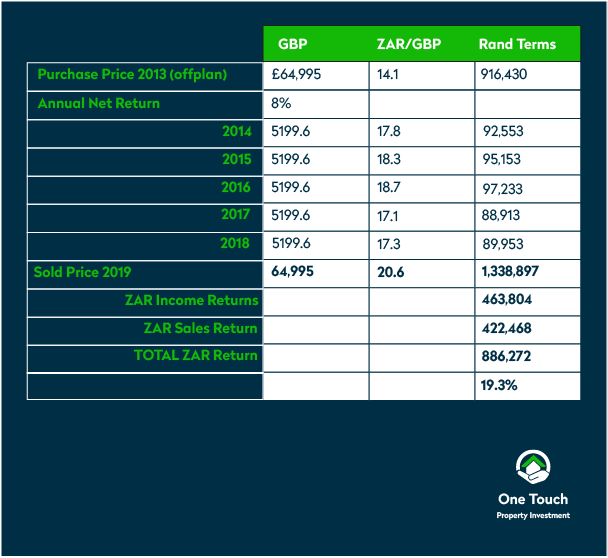 The contractual five-year rental return may not have seemed that interesting for the investor who could have earned a similar amount by having the savings in a South African bank. However, in real terms the investor would have received an annualised return of 19.3%.

Investment property companies like One Touch Investment have been assisting South Africans diversify their portfolio by investing in property UK. Their experienced consultants usually visit South Africa every three months. You could speak to a property investment company to discuss your ideals and find out which type of investment works best for you.

The thought of Brexit and Coronavirus do not make any investment clear cut. However, of the two countries medium term prospects, which look more appealing at this stage?

South Africa's credit rating was downgraded - how to invest elsewhere